The Aha Kiole Advisory Committee (AKAC) was established in 2007 by the Hawai’i State Legislature through Act 212 whose purpose was to initiate the process to create a system of best practices that is based upon the indigenous resource management practices of moku (regional) boundaries that acknowledges the natural contours of land, the specific resources located within those areas, and the methodology necessary to sustain resources and the community.

Appointed by Governor Lingle, the AKAC advises the legislature in carrying out the purposes of the Act by providing advisory input based upon the Native Hawaiian resource management practices of each of the 43 moku in the main Hawaiian Islands to state and county agencies. Members are mandated to aide in the development of a comprehensive set of best practices for natural resource management; to foster understanding and practical use of knowledge including Native Hawaiian methodology, to ensure the future sustainable use of the State’s marine, land, cultural, agricultural, and natural resources; to enhance community education and cultural awareness; and to participate in the protection and preservation of the State’s natural resources.

Here you will find a repository of documents related to the Aha Kiole Advisory Committee: 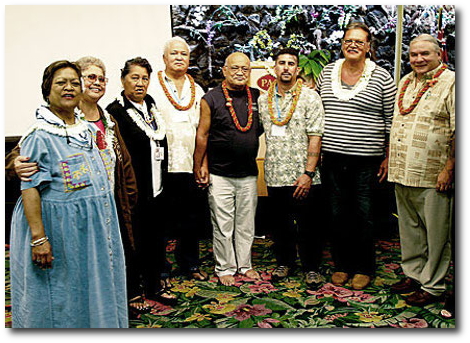 Buttons was raised by his mother and grandparents, John and Precious Puniwai in Puueo, island of Hawaii (Moku o Keawe), from whom he learned traditional planting, gathering and fishing practices. As an adult, Buttons worked and resided in Kona and then South Kohala, during which time he continued to practice what he had been taught. For the past 20 years, Buttons has been residing in Puukapu, North Kohala. Retired from the Police Department, he farms and occasionally fishes.

Buttons has passed the knowledge he gained from his mother and grandparents on to his children and grandchild. He also instructs children at Hawaii ko Aloha, under a youth exchange program with Native American children, and has given statewide presentation with the University of Hawaii (UH) College of Tropical Agriculture and Human Resources and, with UH professor Dr. Isabella Abbott, has given a kalo (taro) presentation at the Bishop Museum.

Timothy is recognized as a premier authority of the relationship between native Hawaiian natural resources and culture. He has given numerous presentations on this topic at Kamehameha Schools, University of Hawaii, Baldwin High School, St. Louis High School, National Park Services and the Hoohanohano I Na Kupuna puwalu series.

He has worked since 1992 as a biological science technician for the Haleakala National Park on Maui. He is an expert in living, working and adapting to remote conditions and in tracking and capturing animals and is a certified primary bird surveyor in Hawaiian forests.

Charles was taught the ways of mahiai and lawaia from his grandparents, Elizabeth and David Hoopii, who began teaching him from the age of 6. His grandmother taught him to till the soil to make better crops; to make many kinds of lei; and to gather, prepare and weave lauhala leaves. Charles has been passing these practices to his grandson.

From his grandfather, Charles learned to set fish traps, lay upena (nets) and find hee (octopus) using a glass box. He was taught to take only what the family needed and to leave the small ones for later. He learned the names of fishes, different varieties of opihi, how to gather limu and what each could be used for on the dinner table and how to prepare them. He learned when to gather and when to let it be. He learned respect for the ocean and safe practices. Charles also learned the art of paipai (slapping the water) to fish in streams and gather opae kala ole and oopu.

Charles was taught the ways of mahiai and lawaia from his grandparents, Elizabeth and David Hoopii, who began teaching him from the age of 6. His grandmother taught him to till the soil to make better crops; to make many kinds of lei; and to gather, prepare and weave lauhala leaves. Charles has been passing these practices to his grandson.

Jean Ileialoha Keale Beniamina of Lihu‘e died July 10, 2010, at her home, at age 54. Born on Aug. 5, 1955, in Puuwai, Ni‘ihau, she was an outreach counselor and assistant professor at Kaua‘i Community College.

She was preceded in death by her husband Larry.

Ilei was known statewide as an award-winning singer/songwriter and leading organizer and community liaison for Hawaiian education. She was one of the founders of Aha Punana Leo, which beckons Hawaiians to reclaim their native language and culture, and was the Native Hawaiian Education Association’s 2007 Educator of the Year.

Born and raised on Niihau, Ilei received a firm foundation of cultural traditions from her grandmother and mother. She was educated on Niihau up to the 8th grade and then at Kamehameha Schools and the University of Hawaii at Manoa and at Hilo, where she received a bachelor’s degree in secondary education and Hawaiian studies and pursued a graduate degree in literature. In 1985, she began lecturing at Kauai Community College.

Thomas Hashimoto was born in Ha’ena in 1934, on the Island of Kauai. He’s a traditional Lawai’a (fisherman) and Mahi’ai (farmer) with methods passed down from his father. He strives to perpetuate the Hawaiian resource protection methods and living Pono with the land and ocean.

A treasured kupuna, Les and his ohana from Maui have been gathering and fishing on six ahupuaa for more than 10 generations. Les believes in a simple Hawaiian lifestyle, which includes fishing and planting, using one’s own natural resources within one’s own moku boundaries. The island of Kahoolawe is part of his ancestral and cultural connections through both of his parents’ genealogy. He and his ohana are known for taking care of and sustaining the ecosystem off of Kahoolawe and Maui for generations.

Les has been involved with the Kahoolawe Conveyance Commission, the Kahoolawe Island Reserve Commission and the Protect Kahoolawe Ohana, of which he is the current kupuna spokesperson. He sat on the Cultural Resource Management Plans and Land Use Committee prior to the cleanup of ordinances on the island. He participated in marine research of the island’s shoreline during a joint venture with NOAA and the Protect Kahoolawe Ohana Fishery Studies.

Kyle Nakanelua resides in Haiku. He’s a Fireman and Captain at Kahului airport. Kyle, is also the Alaka’i for Halemua. Halemua specializes in male activities within Hawaiian life, past, present, and future.

Winnie learned the Lawai’a and Mahia’i practices and knowledge of her ancestors from her Kupuna. She has been using this generational knowledge on the island of Lanai (Moku of Kona and Ko’olau) for 40 years. Winnie currently serves on the County of Maui’s Council on Aging.

Kamalu Poepoe along with husband Mac Poepoe has taken the Aha Ki’ole of Moloka’i to a significant level that protects the natural resources of their Ahupua’a. Her leadership that opposed many developments to the island has kept Molokai within the daily lifestyle of the Hawaiian people in their community.

Keith Robinson was selected by the Ni`ihau community members to represent their island.  The Robinson family have been the hereditary Konohiki for the island of Ni`ihau since it was purchased from Kamehameha V by Keith’s great, great grandmother Elizabeth McHutchinson Sinclair.  Keith has continuously expressed his desire to keep the island private to preserve Ni`ihau customs and traditions and protect its environment. On Kaua`i, Keith maintains a private botanical garden and is credited with keeping numerous Hawaiian plants from extinction.

Leialoha “Rocky” Kaluhiwa lives in the `ili of He`eia Kea, in the `ahupua`a of He`eia, Moku of Ko`olaupoko.  A great great granddaughter of Wahineali`i Komomua Akona, she can trace her lineage back more than a hundred years in He`eia Kea.  She is an officer of the Ko`olaupoko Hawaiian Civic Club, a non-profit community organization dedicated to the perpetuation of the Native Hawaiian culture, heritage and people (http://www.koolaupokohcc.org).

Pi`ilani Kaawaloa lives in the ahupua`a of Puna on Hawaii`i island, and grew up on the slopes of Kilauea. She is a cultural practitioner, hula practitioner, singer, chanter and teacher in Pahoa.